8/20/2013 – Thanks to Dirk Denzer, the official part of the inaugural event of Eichhorn becomes the highlight of the evening. The audience and the customers are enthused by Dirk Denzer’s new event concept. 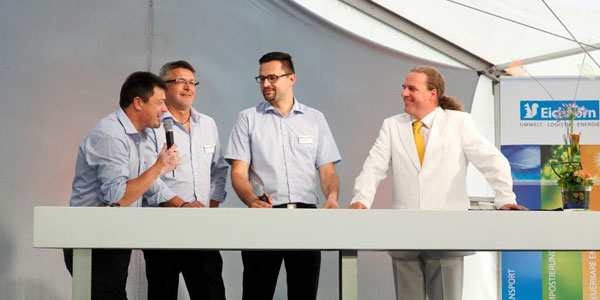 Eichhorn extended an invitation to Eltmann near Bamberg for the inauguration of its new, highly innovative office building with a modern passive house standard. Instead of starting the evening as usual with the official part so as then to follow that with the dinner and to have the show part at the end, Dirk Denzer implemented his new event concept. This innovation in the flow of events was already implemented successfully at the building inauguration event of BayWa Agrartechnik in spring 2013.

Eichhorn was also hugely enthusiastic about the fact that Dirk Denzer staged the complete official part of the evening as the main show of the event and also presented it in person. Between the entertaining discussions, show inserts appropriate to the flow/topic of discussion were repeatedly incorporated.

The events of BayWa Agrartechnik and Eichhorn each lasted approximately 60-90 minutes. At both events, there was huge enthusiasm and an incredibly good mood in the audience. Although, on the one hand, the company content is communicated, on the other hand rather boring speeches – often heard at such events – are replaced by original, subject-specific discussions.